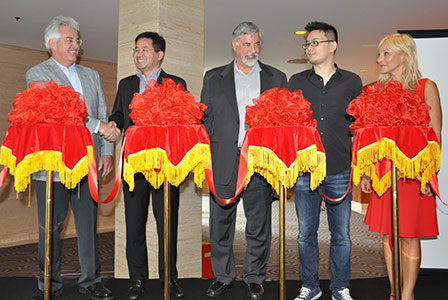 Coins are now being accepted from collectors and dealers for PCGS certification in mainland China through its strategic partner, Shanghai Quanping Collectables Co., Ltd (www.shquanping.com).  Modern Chinese coins dated after 1979 and vintage Chinese coins from the late 1700s to the mid 20th century locally available in mainland China can be submitted.

The Shanghai grand opening attracted prominent numismatic community dignitaries from China, the United States and Europe.  There were also enthusiastic responses from collectors and dealers who submitted thousands of coins to PCGS through Quanping during the Shanghai Coin Expo on July 20 and 21, according to PCGS officials.

The first two coins certified by PCGS in Shanghai were specially selected to symbolically represent modern and vintage Chinese coins.

An impressive 2013 Putuo Guanyin South Sea Bodhisattva variety one kilo gold 10,000 Yuan submitted by Mr.  Yu Jiwei, Chairman of Quanping, was certified PCGS Secure Proof 70 Deep Cameo (PR70DCAM).  It is the finest known of the 300 issued by the People's Bank of China, and the insert label on the holder indicates it is the "First Coin Graded in China" by PCGS.

A rare 1911 Tianjin Long-Whiskers Dragon gold one Yuan pattern coin (L&M 1083) from the third year of the Husan-Tsun Qing Dynasty was graded PCGS Secure Specimen 63+ (SP63+).  This rare and precious coin was once in the famous Farouk, Kann and Chang collections, and was submitted for PCGS certification on behalf of two Chinese collectors who want to be anonymous.

"The opening of the PCGS Shanghai office and our first on-site grading event were successful beyond our expectations.  Even more significantly, the enthusiasm I saw in the Chinese coin market reminded me of the great coin market we had in the United States in the 1970’s," said Mr. David Hall, President of Collectors Universe, Inc. (NASDAQ: CLCT) and a PCGS Co-Founder.

"I was greatly encouraged by the number of attendees at the grand opening and the enthusiastic support for PCGS in Shanghai.  All of us on the PCGS team are grateful for the many positive comments we received," said Mr. Don Willis, President of PCGS, a division of Collectors Universe, Inc.

"The opening of PCGS China and easing the access to PCGS grading and restoration services in mainland China, the launch of the new PCGS Chinese website (www.PCGS.com.cn) with its extended PCGS Chinese Price Guide and the introduction of a new PCGS holder were just the beginning of our contributions to the Chinese numismatic community.  We look forward to introducing more tailor-made services to the Chinese coin market in the near future," said Ms. Muriel Eymery, PCGS Vice President of International Business Development.

For additional information about PCGS grading services and fees in mainland China, go to www.PCGS.com.cn.