"This will be the first time we will have our world coin grading experts coming to Paris for on-site authentication, grading and certification of Chinese and other Asian coins," said Ms. Muriel Eymery, PCGS Vice President International Business Development.

"This will be a great benefit for European collectors and dealers who have focused on collecting this type of coinage over the centuries.  Given the appeal of Asian coins among Europeans, the links to trading between Europe and Asia and the minting facilities in Europe that were used for production of some coinage dies, more and more PCGS-graded Chinese coins are being featured in major auctions across Europe." 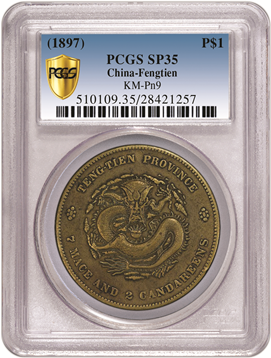 An important example of great Chinese coins offered for sale in Europe will be in the February 20 - 21 auction to be conducted by one of the many prestigious PCGS Authorized Dealers, Teutoburger Muenzauktion of Borgholzhausen, Germany.  The coin is an undated (1897) Tien Fung Province Pattern Dollar struck in brass with a reeded edge and the spelling mistake, TENG-TIEN (Lin Gwo Mint 467, KM pN9).  It is graded PCGS Secure SP35.

This historic coin is one of only four known of its kind, and researchers believe it probably was made in Germany as a proposed design for presentation to the Chinese government but rejected because of the spelling error.

"With the PCGS guarantee of authenticity, more European auctioneers are realizing the value of offering PCGS-graded coins in their auctions, and the rare Chinese Dollar pattern is a good example.  We are seeing an increasing number of PCGS-certified rare Asian, British, German and Russian coins in auctions in Europe along with more direct submissions from dealers and collectors in Germany," explained Ms. Eymery.

PCGS officials successfully participated at the recent, big World Money Fair in Berlin, and will be participating at the upcoming Numismata Munich show, March 8 and 9, 2014.  PCGS will be accepting coin submissions for the Paris Grading Week at its booth (Stand G2 in the Veranstaltungscenter in Munich, Germany).

For additional information about PCGS services in Europe, www.PCGSEurope.com.