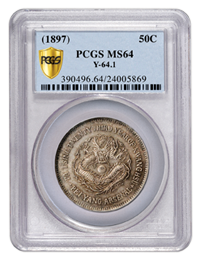 (Hong Kong) - Collectors and dealers from across Asia are eagerly anticipating continued growth in the vibrant rare coin and modern coin market during the upcoming Hong Kong International Coin Convention and Antique Watch Fair (www.PCGSAsia.com/HongKongCoinShow) . The show will be held in the Holiday Inn Golden Mile in Kowloon, August 24 - 26, 2012, and will be open to the public.

The condition (grade) of a coin is an important factor in its marketplace value. A major trend in the Asian rare coin and modern coin market is to have them certified for authenticity and graded by independent, recognized experts, such as Professional Coin Grading Service (www.PCGSAsia.com) .

For example, a rare Chinese Year 23 (1897) Pei Yang Arsenal 50-cent denomination coin with a catalog value of $5,000 in brilliant uncirculated condition sold for $77,675 USD at a Hong Kong auction in April after it was certified as "Mint State 64" (on a scale of 1 to 70) by Professional Coin Grading Service (PCGS).

PCGS is a division of California-based Collectors Universe, Inc. (NASDAQ: CLCT) and is the world's leader in coin authentication and grading services. The company has now expanded its services in Asia, including a corporate office and submission center in Hong Kong, and the introduction of the www.PCGSAsia.com web site in Chinese and other Asian languages.

PCGSAsia.com features the Price Guide, Auction Price Realized and Population Reports for coins in China, Japan and Korea. PCGSAsia.com is mobile optimized for Smartphones and tablets in addition to traditional desktop websites.

PCGS will be accepting rare and modern coins from the public for certification at the upcoming Hong Kong coin show, and the new PCGS Hong Kong Submission Center that is open to the public and dealers. Everyone submitting coins to PCGS at the Hong Kong show will receive a free, five-power magnifying glass loupe to help them enjoy and learn about coins.

“For 26 years since its founding, PCGS has provided safety, security and value for collectors and dealers. Coins authenticated by PCGS often bring more money than coins that are not because people trust the world’s number one certification service,” said Don Willis, PCGS President.

Coins certified authentic by PCGS are "encapsulated," placed in a sturdy transparent holder made of inert materials and sealed with a tamper-evident method that inhibits atmosphere gases and contaminants that might harm coins.

PCGS offers an unlimited lifetime guaranty of authenticity and grade.

Mr. Ma stated: "The opening of the PCGS grading center in Hong Kong will definitely be taking grading service to a new level with year-round lower fees and shorter turn-around time. It will be a great convenience and service to collectors and dealers in Asia."

Since its founding in 1986, Professional Coin Grading Service experts have certified over 24 million coins with a total market value of over $26 billion. PCGS now certifies the authenticity and grades of coins from over 100 countries.